Load Factor can be an important variable in determining electricity costs which many businesses may not be currently monitoring. It is essentially a measure of efficiency that can play a role in both supply and utility costs. It can be calculated by applying the below formula to data found on your monthly utility invoice:

According to the PUCO’s Glossary of Utility-Related Terms, Load Factor is, “the ratio of average demand to peak demand; a measure of efficiency that indicates whether a system’s electric use over a period of time is reasonably stable, or if it has extreme peaks and valleys.” It is expressed as a percentage and can be increased by either increasing usage and keeping billing demand the same or lowering demand and keeping usage the same. The latter option would yield a better result, as an increase in usage would lead to higher costs. 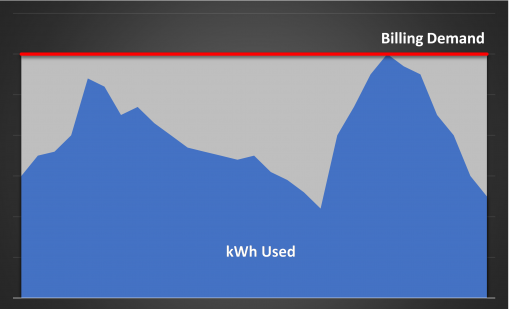 The savings opportunity in a high load factor is twofold. First, load factors are used by suppliers when calculating electricity rates. High load factor accounts are very desirable to suppliers and generally attain the most competitive bids – lowest prices for electric supply. Conversely, many suppliers tend to provide less competitive pricing to accounts with a worse load factor, as these accounts generally prove more risky to service. Secondly, many utilities use billing demand or load factor when calculating the utility portion of a customer’s bill. The billing demand is captured by the utility in either 15 or 30 minute intervals. So, a simple way to lower billing demand would be turning on machines and equipment in stages, or as needed, rather than all at once. Subsequently, demand becomes more spread out, which leads to a lower monthly billing demand and a higher load factor.